Horsepower and Torque on the 2017 Chevy Silverado HD Diesel

A while ago we were excited about the engine intake system that was announced for the 2017 Chevy Silverado HD diesel. Now we have even better news! Thanks to a huge redesign, the Duramax diesel available on the heavy-duty Silverado will be able to crank out even more horsepower and torque. Keep reading to learn about 2017 Chevy Silverado HD diesel engine specs as well as new information about this great do-anything truck. 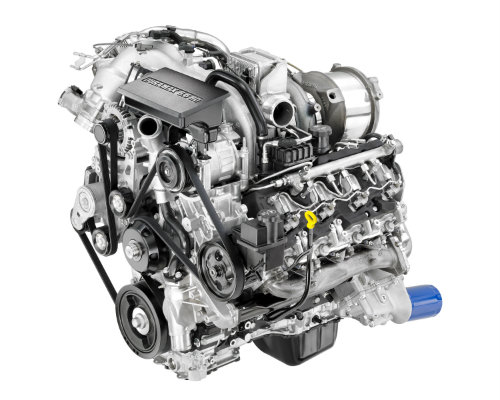 The improved Duramax 6.6-litre V8 turbo-diesel available on the 2017 Chevy Silverado HD will be able to crank out 445 horsepower and 910 pound-feet of torque. It will offer peak torque between 1,550 rpm and 2,850 rpm, which can offer more immediate towing and hauling confidence. We’re anticipating that the new Silverado HD will be able to offer even safer and more impressive towing ability than ever before.

Advantages of the Redesigned Duramax Diesel

In addition to an added 48 horsepower and 145 pound-feet of horsepower compared to the 2016 Chevy Silverado 2500HD, the new diesel engine will offer other advantages. Some of those include newer and stronger cylinder block, cylinder heads, and rotating and reciprocating assembly, all-new electronic controls and a revised electronically controlled turbocharging system. Bio-diesel compatibility and increased oil and coolant-flow capacity are other exciting changes. The new Duramax 6.6-litre diesel will also feature the segment’s first re-melt piston bowl rim, a Venturi Jet Drain Oil Separator, and closed-loop glow plug temperature control.

We’re not sure when the 2017 Chevy Silverado HD with the Duramax diesel will be available on our lot here at Craig Dunn Motor City, but contact a member of our sales team if you would be interested in getting updates.

High Desert Package Available in 2017 on the Silverado

Does Chevy or Ford Have The Toughest Construction?