This year at the Vancouver International Auto Show, we saw the Canadian debut of two small cars that are guaranteed to be game-changers. One was the all-electric 2017 Chevy Bolt. The other was the 2017 Chevy Sonic, which brings an elegant new style and top connectivity technology to the sedan and hatchback small car game. Keep reading for a few exciting powertrain and connectivity facts we’ve learned thanks to the 2017 Chevy Sonic Canadian debut. 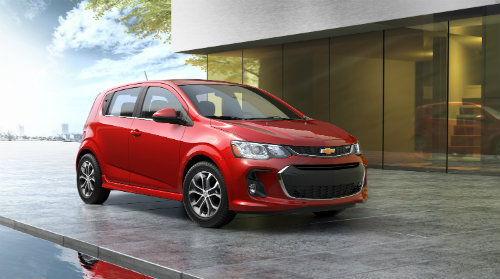 For 2017, the Chevy Sonic is getting a new standard 1.8-liter Ecotec engine that should deliver similar fuel economy numbers to the 2016 Chevy Sonic. Details aren’t yet available. The 138-horsepower 1.4-litre Ecotec turbo with return again as an optional engine with premium acceleration.

A rearview camera will now be standard on all models of the Chevy Sonic. In addition to standard safety technology like 10 standard air bags, Stabilitrack electronic stability control and antilock braking, the 2017 Chevy Sonic will be available with Forward Collision Alert, Lane Departure Warnings, and Rear Park Assist.

Premium connectivity in the 2017 Sonic

Some of the most exciting features on the new Sonic are the comfort and connectivity features of the interior. The 2017 model will be the first in its segment to offer a power driver’s seat. Other features like keyless entry and ignition and available heated seats and steering wheel will also be available.

A seven-inch touchscreen will also be available that will have 4G LTE Wi-Fi hotspot capability. This system will also be compatible with Apple CarPlay and Android Auto, meaning that enabled smartphones will be able to connect even more easily to the infotainment system of this zippy small vehicle.

With the arrival of the 2017 Bolt and 2017 Sonic, Chevy will be introducing seven new or completely redesigned vehicles for the model year. The 2017 Chevy Sonic will go on sale in North America in fall, but there is no news yet on a specific Canadian release date. Keep watching this blog for the latest information. You can also schedule your test drive at Craig Dunn Motor City in advance online.

When folks are in the market for a compact and well-equipped vehicle for very reasonable price, the Chevy Sonic has long been a great option. For 2017 this model features a great new appearance and even better features. Keep reading for a nitty gritty comparison between the 2017 Chevy Sonic vs 2016 Chevy Sonic.

New Exterior on the 2017 Chevy Sonic

The front and rear fascia, hood, and lighting elements of the 2017 Chevy Sonic are all new, and give the new Sonic an even more confident and stylish exterior appearance than the previous year’s model. New 15-inch, 16-inch, and 17-inch wheel designs will also be available.

Other features new for 2017 on the Sonic

There are plenty of other places we can compare the 2017 Chevy Sonic vs 2016 Chevy Sonic. Some other new features that will be appearing on the 2017 model include LED signature lighting, an improved MyLink infotainment system, new gauge cluster, Keyless Open and Start, available heated seats and steering wheel, and red cloth seating available on the RS trim. A touchscreen display and 4G LTE Wi-Fi capability will still be available.

For more information on the new features of the 2017 Chevy Sonic, or its arrival date here at Craig Dunn, contact a member of our sales team today.