You may also remember this truck recently taking first place at the Canadian King Truck Challenge in the midsize truck category. Matched with an all-new 2.8-litre Duramax turbo-diesel engine rated for 181 horsepower and 369 pound-feet of torque, the GMC Canyon diesel has fuel consumption numbers as low as 10.8 L/100km in city driving and 7.7 L/100km on the highway, for a combined rating of 9.4 L/100km combined with two-wheel drive. 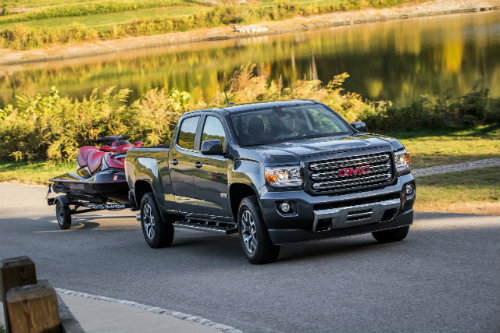 Read More: What is the Difference Between Four-Wheel and All-Wheel Drive?
The 2016 GMC Canyon with the new Duramax diesel engine has also been certified as one of the cleanest diesel trucks ever produced by GM. Using a cooled exhaust gas recirculation system, it unquestionably meets U.S. emissions standards, and the U.S. EPA has expressed no concerns about the quality and cleanliness of this truck.

Read More: What are Some of the Advantages of Diesel?

The 2016 GMC Canyon diesel is scheduled to go on sale this fall, and be priced approximately $4,390 more than similarly equipped V6 models. Available in SLE and SLT Crew Cab models, the diesel edition of the GMC Canyon will required the available trailering package to be able to tow a maximum of 7,700 pounds (3,492 kg) with two-wheel drive and 7,600 pounds (3,447 kg) with four-wheel drive. These are the best tow numbers available on a midsize truck.

Canyon Gets New Models, Transmission for 2017

What Is the Best Midsize Truck? Try the GMC Canyon