It’s been an exciting couple of days for news on Chevy and GMC 2016 models. One vehicle that will feature a variety of anticipation-worthy options is the Chevy Colorado. This excellent Chevy truck, just redesigned in 2015, is going to come with new, even more impressive options in the coming year, like a diesel engine, the Midnight Edition, and improved off-road possibilities. All this and the 2016 Chevy Colorado release date are our news for the day. 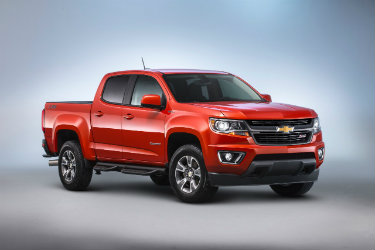 The 2016 Chevy Colorado will be available with a 2.8-liter Duramax turbo-diesel engine that promises to increase the already impressive fuel efficiency on this midsize truck without skimping on power. This diesel engine will be available on LT and Z71 Crew Cab models of the Canyon (diesel will also be an option on the 2016 GMC Canyon). Pricing will be released later this month.

The 2016 Chevy Colorado will also come in a Z71 Trail Boss version for those with a taste for off-roading. Jumping off from the Z71’s already strong off-road suspension, the Trail Boss edition will pair black-finished aluminum wheels and all-terrain tires for the best ride. The Trail Boss will be available in two-wheel or four-wheel drive. Interior all-weather floor mats and some external enhancements will make it even easier to take to the countryside.

Our Craig Dunn team is dedicated to getting you the best new cars and trucks near Winnipeg MB. Keep an eye out for the 2016 Chevy Colorado and its many possible versions coming this fall.

How powerful is the new Colorado?