We’ve had a lot of Chevy vehicles getting recognized for their excellence lately, first the 2016 Chevy Colorado being named Motor Trend Truck of the Year, then the 2016 Chevy Impala getting the Kelley Blue Book stamp of approval as Full-size Car Best Buy, and now the 2016 Chevy Silverado had been named the Best New Pickup in Canada by the Automobile Journalists Associated of Canada (AJAC)! 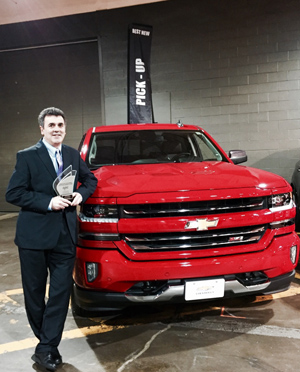 Vehicle contenders at the AJAC TestFest event at Canadian Tire Motorsport Park endured serious testing over variety of road styles and even on the track with top test drivers. The trucks at this competition were carefully monitored for objective information, and also driven by many respected automotive journalists to get people’s personal impressions. Final scores were a combination of objective data and driver satisfaction.

But what makes the new Silverado the best? Maybe its solid, long-lasting construction, and impressive V8 engine that is certainly up for towing and hauling serious loads. And with cutting edge efficiency technology like direct injection, cylinder deactivation when the truck isn’t loaded or towing, and continuously variable valve timing, this truck also offers the best V8 fuel economy of any pickup with just 10.4 L/100km in 5.3-litre models. It also offers a segment topping 420 horsepower with the available 6.2-litre V8 engine.