What Is the Best Midsize Truck? Try the GMC Canyon

Midsize trucks are increasing in popularity every year. We have long been in love with the premium and versatile GMC Canyon, but now we have another reason to brag about it! Cars.com just named the 2016 GMC Canyon the Best Midsize Pickup Truck of 2016 for its nimble handling, impressive tow rating, and attractive interior.

Read More: Is a Full-size or Midsize GMC Truck Best for You?

This is the second time that the GMC Canyon has been named the Best Midsize Pickup Truck by Cars.com. Many of the reasons that this truck excels remain the same: it delivers top capability with premium driving.

In the 2016 Cars.com Midsize Pickup competition, the 2016 GMC Canyon took first-place finishes for its Gross Combination Weight Rating (GCWR), its light construction, top payload, and max tow rating. It also received the most judges’ points of any vehicle in the competition.

Furthermore, the Canyon consistently took first or second in the majority of categories, which kept it ahead of its sister-vehicle the 2016 Chevy Colorado and the contest runner-up, the 2017 Honda Ridgeline. Experts appreciated the confident driving and elegant balance that the 2016 GMC Canyon brought to the road. 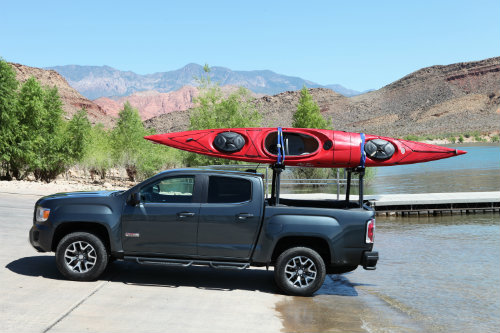 Other Advantages of the 2016 GMC Canyon

While the Canyon SLE package was the truck that won the Cars.com Best Midsize Truck of 2016 award, other models of the Canyon midsize truck also bring premium value to the truck ower’s life. The GMC Canyon with the optional diesel engine offers incredibly low fuel consumption numbers, and the small dimensions of this truck make it ideal for maneuvering in city environments as well as in the country and off the road.

We are proud of the current generation of the GMC Canyon on our lot, and are even more excited about new models coming out later this year, like the luxurious 2017 GMC Canyon Denali trim.

Canyon Gets New Models, Transmission for 2017