The Trax Cranks the Adventure to 100!

The Chevy Trax is a confident and engaging small SUV perfect for city maneuvering and confident commuting, but the Chevy Trax Activ Concept at SEMA 2016 brings that easy competence to the outdoor scene as well. Keep reading to check out the new style and adventuring capability showcased on this Chevy SEMA 2016 concept vehicle.

Check Out These Chevy Trucks at SEMA 2016 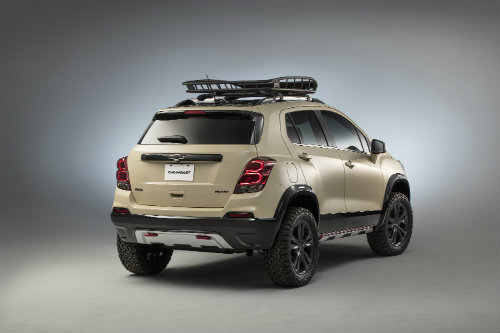 Based on the all-wheel drive 2017 Chevy Trax, The Trax Activ concept car features a new front-end, a unique interior, and premium technology.

With a wider track, a unique lifted suspension, and 18-inch wheels with all-terrain tires, this concept can perform admirably in many different driving environments. It offers more ground clearance, more traction on the highway, and improved approach and departure angles. The front and rear fascia redesign and custom fender flares provide both practical driving and off-road style.

The Jet Black interior of the Trax Activ Concept features Satin Graphite accents and all-weather floor liners. The interior of this Trax concept also features the standard cargo advantages of this compact SUV, which include a flat-folding front passenger seat and a 60/40 rear folding seat that allow cargo of various sizes to be fit into the vehicle.

Exterior of the Activ

The Chevy Trax Activ concept has a Satin Sandstorm exterior, with red tow hooks, tinted headlamps and taillamp lenses, and a Thule accessory roof basket and custom LED light bar mounted to the top, all of which add to both the confident appearance and the off-road and cargo capability of this unique and engaging concept.

If you’re interested in seeing more concept vehicles from SEMA 2016, check out our Malibu and Cruze Blue Line and the Chevy Silverado Carhartt blog posts!

How spacious is the new Trax?

Check out the Chevy Trax